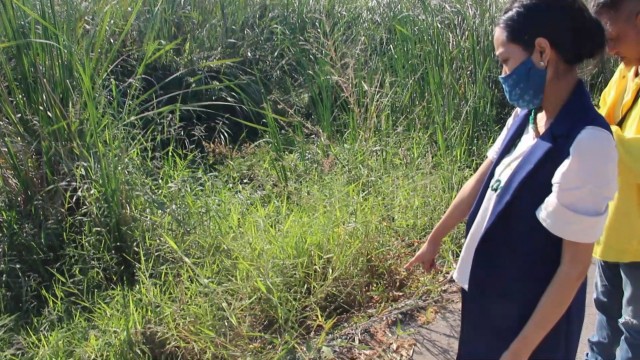 Police are searching for a woman who abandoned her newborn female baby on Mumon-Nakwang Road in Udon Thani’s Mumon subdistrict.

At noon on Tuesday, Muang Udon Thani officers were alerted to a newborn left at the side of the road. When they arrived at the scene, they were met by Watchara Jaruchai, 27, a local of Amnat Charoen province, who said she found the baby while driving back to her residence from Samrong Yutthawas Temple, where she had made merit.

“I found the baby girl lying on the side of the road with no clothes. Her body was all red from sunburn and had insect bites all over,” she said. “I picked her up, covered her with my jacket and drove to Udon Thani Hospital as she was not moving but was breathing.”

Police contacted the hospital and were informed that the baby was stable. According to one of the nurses, the infant was born just about 4 hours before she was abandoned. She suffered from dehydration, dry skin and insect bites. “The umbilical cord was cut rather cleanly so the mother might have had someone who knew about child birth,” the police said.

“We will search surrounding areas to identify the mother and ask nearby hospitals if they have any clues,” the police added.

Thanks to our sponsors.

A monk with winning lottery numbers was forced to flee his temple in northwest metro Bangkok after people would not stop coming to ask for money.

Assistant abbot Sitthi Woradit of Wat Thinnakorn Nimit said yesterday that the monk, Ajahn Montri Samujjo, was no longer at the Nonthaburi temple days after he won a THB18 million lottery prize, prompting people to flock there, disturbing the clergy every night and making it hard for anyone to sleep.

He said that people came from all over seeking the monk’s charity. The assistant said the 67-year-old monk had asked for permission to stay at an undisclosed temple in another province. They agreed.

Unaddressed was the fact that it’s actually forbidden for monks to buy lottery tickets at all.

Thanks to the sponsors As Americans struggle to count the remaining votes before they all start shooting each other, Thailand late Friday afternoon came to the rescue. Specifically, a meerkat held captive in the deep Thai south at the Songkhla provincial zoo who was tasked with settling things, once and for all.

Emerging from its meerkat aperture (Ed. note: We know little of meerkats except they’re neither cat nor kat), the plucky mongoosealike gave a once-over to both candidates’ portraits hanging from a wire line … and retreated back into its hole for a think.

(Who does he think he works for, Nevada’s Secretary of State?)

Before long, the meerkat re-emerged directly below Biden and decisively pawed at his photo.

So there you have it. Congratulations President-Elect Biden! The meerkat has chosen. The original plan was to reduce quarantine for all arrivals, but it went over poorly with the public. For now, everyone else will still have to do the full 14 days.

Kiattiphum added that visitors who have completed quarantine will be required to use a tracking device and check in by phone.

The permanent secretary said tourists would only be allowed to travel to approved provinces based on how effective they are in disease control – and how willing their residents. Ten provinces are loosely planned for now, including Chonburi and Buriram. All will be proposed for later approval by the COVID-19 task force.

On Tuesday, Araya Lertsansiri, a noodle vendor in Surin Municipal Market, said she received a Bt100 bill that “felt different” than the others.

“The surface of the bill feels like that of photocopy paper and is more coarse compared to other [genuine] bills,” she said. “I wrote down the serial number – 0 E 1238302 – and am contacting the bank to verify whether it’s genuine or not.”

A news source from Bangkok Bank’s Surin branch revealed that a merchant has asked the bank to verify a Bt100 bill that he received earlier as the colour had faded after it was exposed to a drop of water.

“The bank said the bill was fake,” the source stated. “Furthermore, the serial number on the bill is also 0 E 1238302, which is the same number as the suspected bill reported at Surin Municipal Market, indicating that the fake bills are probably from the same source,” he said

“I want to warn fellow merchants to be extra careful when receiving bank notes from customers,” said Therdphan Warangkhanakul, a local merchant who has had experience dealing with fake bills.

“When you touch fake bills, you will notice that the surface is different from other bills. Also, when you look through it at sunlight you will not see a clear image of HM the King in the blank space as in genuine bills,” he said.

“To those using fake bills, please stop. You are hurting others and the country’s economy,” he pleaded.

Thanks to the Sponsors. 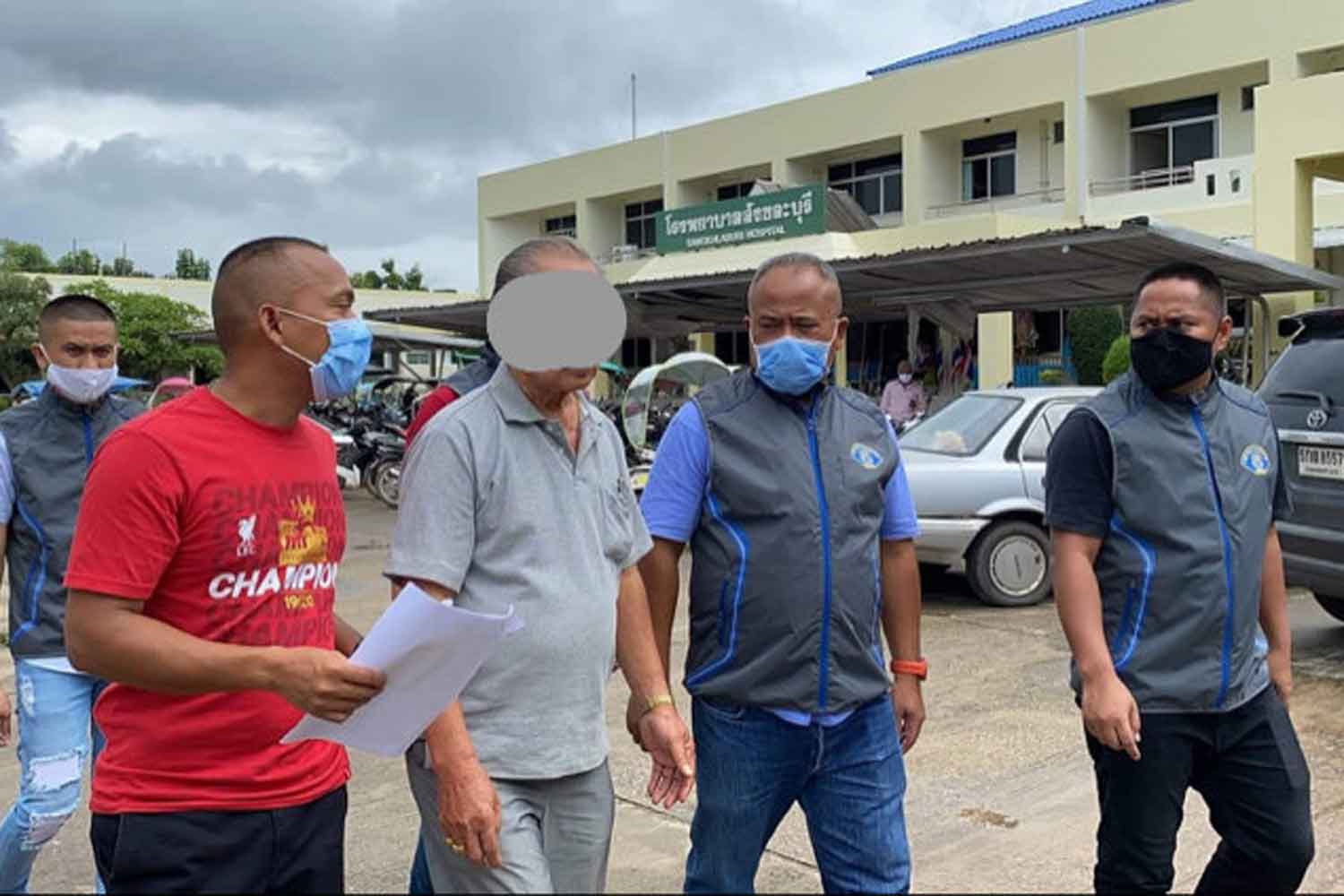 Murder suspect arrested after 12 years on the run

Sakol Wichaidit, second left, is escorted to Muang police station in Surat Thani. He was arrested in Sangkhlaburi district, Kanchanaburi, after 12 years on the run. (Photo: Supapong Chaolan)

SURAT THANI: A man wanted on a warrant for murder has been arrested after 12 years on the run.

Police from the 5th sub-division of the Crime Suppression Division led by Pol Maj Pitaya Thanawut on Wednesday arrested Sakol Wichaidit, 77, in the parking lot in front of Sangkhlaburi Hospital in Kanchanaburi province.

He was subseqently transferred to Muang district police station in Surat Thani for legal action.

His arrest follows a complaint filed by Piyaporn Poonprasert, 48, with CSD police.

She said  her husband, Kriangkrai Choeypho, was shot dead during an argument with Mr Sakol in front of their house in the Mongkolsit Housing Estate, tambon Wat Pradu, in Surat Thani’s Muang district on March 31, 2008. The argument was about a debt.

The Surat Thani Court issued a warrant dated April 1, 2008 for the arrest of Mr Sakol for murder. Police  never caught him, and 12 years later he remained free, a fugitive from justice, Mrs Piyaporn said.

The complaint led to Mr Sakol’s arrest in Kanchanaburi on Wednesday.

He confessed to the murder charge, according to police.

A monk in Udon Thani is facing charges after he allegedly sent an explicit video of himself to 20 children, inviting them to have sex with him in exchange for money. 49 year old Pramuk Jaroensuk was forced to leave his monkhood and was charged with publishing pornographic material and attempting to have sexual intercourse with minors.

The monk came to police attention after a villager in the Ban Pheu district filed a complaint reporting that the abbot allegedly sent an explicit video clip of himself to her 12 year old daughter saying “Answer me if you want easy money.” The villager says other Prathom 6, or sixth grade, students also got similar messages from the monk.

“The sender said he would offer 2,000 baht in exchange for sex with him. I searched his name and found that he was the abbot at this temple so I notified police… My daughter said her friends who are in Prathom 6 also received similar invitations from the suspect.

Police say Pramuk admitted to sending the video, adding that he sent it to more than 20 children – boys and girls around 11 to 13 years old – on Facebook.

Pramuk has been a monk for 23 years and has been at the Udon Thani temple for the past 11 years. He was forced to leave his monkhood and was taken to a local police station.