People in Bangkok’s Pomprap Sattruphai district are tested for Covid-19 at a makeshift site outside Bo Be Tower on Damrongrak Road on Tuesday. The mobile unit is part of proactive screening in the district where clusters of infections among migrant workers have been reported. (Photo: Somchai Poomlard)

Beds designated for patients in critical condition at all state-run hospitals in Bangkok are now fully occupied by Covid-19 infected patients with severe symptoms, while the last 20 of such beds are strictly reserved for emergency patients, health authorities said on Tuesday.

Of the new cases, 3,963 were found in the general population, 75 among prison inmates and the rest were imported cases, said Dr Taweesilp Visanuyothin, CCSA spokesman.

The hospital bed shortage situation is of particular concern now, especially since demand for this specific type of hospital bed in the so-called yellow and red groups is high, he said.

Patients in the yellow group are those with moderate symptoms that run the risk of developing into a severe condition, while patients in the red group are already exhibiting serious symptoms, Dr Somsak said.

Over the past couple of months, Bangkok and its surrounding provinces have continued to record more than 1,000 new cases of Covid-19 infections per day, which has resulted in a sharp increase in the number of infected patients in both the yellow and red groups, he said.

As of Monday, all 409 hospital beds for patients with serious symptoms were fully occupied by Covid-19 patients in critical condition. The last 20 beds were reserved for emergency Covid-19 patients urgently requiring an operation or other serious medical interventions, Dr Somsak added.

Only about 300 hospital beds for patients in the yellow group are available as 3,937 others are already occupied, he said. 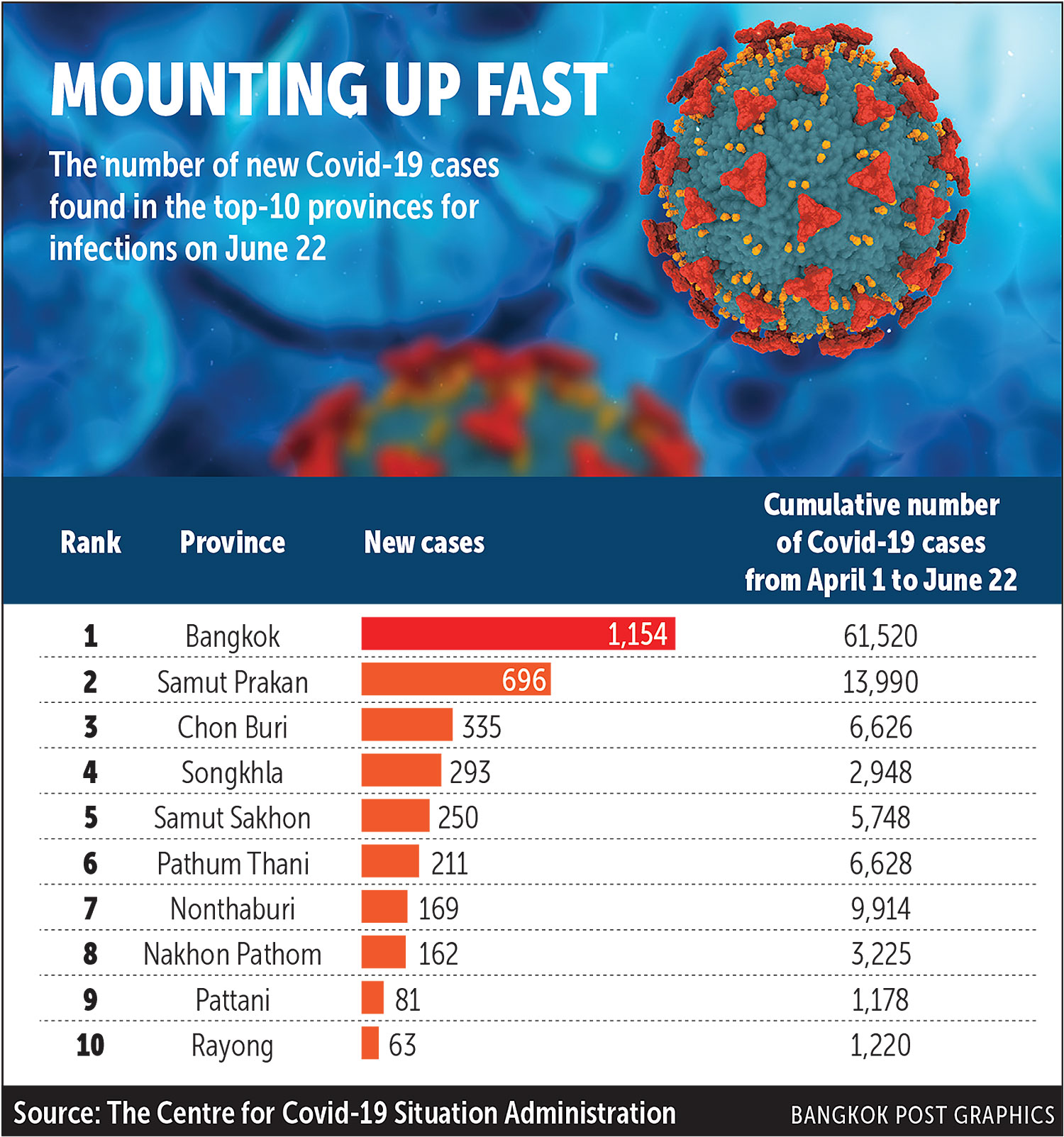 The limited number of hospital beds is stalling the work of medical personnel tasked with finding beds for patients who need to be urgently admitted to hospital for treatment, especially in the capital, he said.

Clinical Professor Dr Adune Ratanawichitrasin, a deputy dean at the Faculty of Medicine of Siriraj Hospital, meanwhile warned in a Facebook post that the Covid-19 outbreak in Bangkok is reaching a critical point.

Hospitals are being flooded with an overwhelming number of Covid-19 patients again, in a situation similar to the serious hospital bed shortage that happened late last month, he said.

“Worse, the source of infection for numerous new Covid-19 cases cannot be clearly identified, which is an indicator the virus has taken hold in many communities,” he said.

He urged decision-makers at all levels to pay more attention to the problem before it gets out of control.

Prime Minister Prayut Chan-o-cha, meanwhile, ordered the Public Health Ministry to ensure there are enough hospital beds to accommodate the large number of infected patients in both the critical red group and the less critical yellow group who are still waiting for beds, said Kiattiphum Wongrachit, permanent secretary for public health after a discussion with the premier on Tuesday.

The ministry will continue operating Busarakam field hospital at Muang Thong Thani in Nonthaburi until at least the end of August, to mainly serve patients in the yellow group, said Dr Kiattiphum.

This field hospital was initially scheduled to be closed at the end of this month, he said. As of last Sunday, the field hospital had about 928 beds available to receive new patients in the yellow group, he said.

Bangkok governor Aswin Kwanmuang confirmed that almost all of the 2,000-plus beds at existing hospital-cum-hotels, known as hospitels, and field hospitals in Bangkok were full.

Gasten  eten  Thais of Nederlands via Honnybee in Udonthani Thailand.