Thais from across Ukraine gathered in Lviv before embarking to Warsaw, where they were to fly back to Thailand. Photo: Ministry of Foreign Affairs.

More than 100 Thais living in Ukraine are being evacuated from the country, the Ministry of Foreign Affairs announced yesterday.

The Thai embassy reports that approximately 90 Thais arrived at the help center in Lviv on Sunday, with 43 arriving from the Ukrainian capital city of Kyiv.

Those evacuated were expected to travel to Poland’s capital of Warsaw by bus and then board commercial flights. They are expected to arrive in Thailand in the coming days.

Additionally, the embassy has organized a second bus evacuation route, which yesterday took Thai nationals from the Ukrainian city of Odessa to Romania on Sunday.

They will then take commercial flights in Bucharest and arrive in Thailand today through Wednesday.

In regards to Thais living in various cities across Ukraine, which has been under attack from Russian forces, the embassy said that all were safe and uninjured.

There were still around 100 Thais unable to leave their homes due to lockdown measures or unsafe conditions, notably in the cities of Mykolayiv and Kharkiv. Rayongers might not have made much of seven monks doing their alms rounds last night, at least not until they demanded cash-only donations and shoveled sticky rice and chicken into their mouths.

Noticing their strange behavior – monks are supposed to fast after noon – police officers discovered that the robed holy men were, surprise surprise, just some regular guys looking for handouts.

The authorities swiftly arrested the fake monks – all of whom stand accused of shaving their heads and donning robes in various hues to scam people – and took them to the nearby Wat Krasae Bon.

There, Noppadon Natataro (actually a monk) searched the impostors’ bags and found most were not carrying certified monk credentials.

One of the men who did have monk papers, identified only as Vina, said he it off a real monk for THB5,000 (US$155). The faux ascetic admitted that he never ordained and only shaved his head and slipped on some yellow cloth for a convincing guise.

Their bags also contained two knives, fake amulets and cash collected from dupes. All of the not-monks will be prosecuted.

Rescue workers and divers today were still searching for an actress who fell from a speedboat into Bangkok’s Chao Phraya River.

Nida “Tangmo” Patcharaveerapong, 37, fell at around 10pm last night from a boat near the Rama VII Bridge in Nonthaburi province.

Tangmo, who has appeared in a slew of television dramas and several movies, was reportedly cruising with friends when she fell in.

Her family suspects foul play, saying they were unable to contact the friends with her on the boat for hours.

Rescue workers had halted the search mission this morning due to water traffic. They were set to resume the search later today.

An adhoc Facebook group to gather information about the search was created a few hours after the incident was widely reported. As of 11am today, the group had grown to more than 2,500 members. 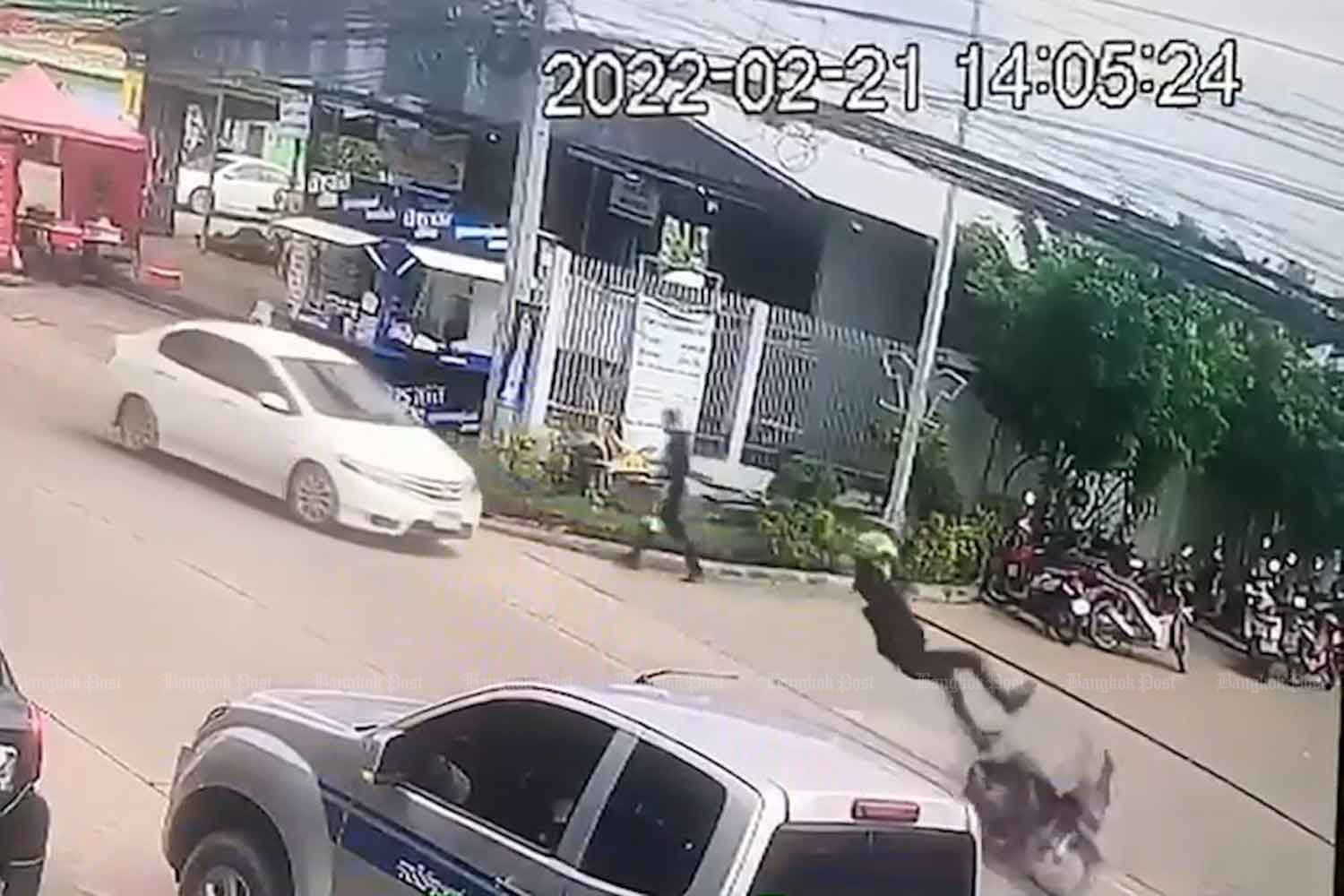 A motorcyclist is snagged by a low-hanging cable and plucked off his bike on Ban Kok Road in tambon Ban Ped of Muang district, Khon Kaen, on Monday afternoon. (Photo supplied)

A young man was caught by the neck and yanked off his moving motorcycle by a low-hanging overhead cable in Khon Kaen on Monday afternoon.

The motorcyclist, who was wearing a full-face helmet, recovered, picked up his damaged bike and later rode off, but a video of the incident went viral.

The video showed the motorcyclist being caught across the neck by a loose communications cable and falling heavily onto the ground as his bike toppled and slid along the road.

Local vendors said that luckily the motorcyclist was not speeding. He got up and had a red mark across his neck, but a moment later rode his motorcycle away.

His name was not known.

The two said it was not the first time an accident like this had happened, but those responsible for the cables never bothered to fix them.

Local people had tried to raise up the low hanging cables, but they would just drop down again. On Monday, a passing truck had hit and pulled down the cable just before the motorcyclist arrived. 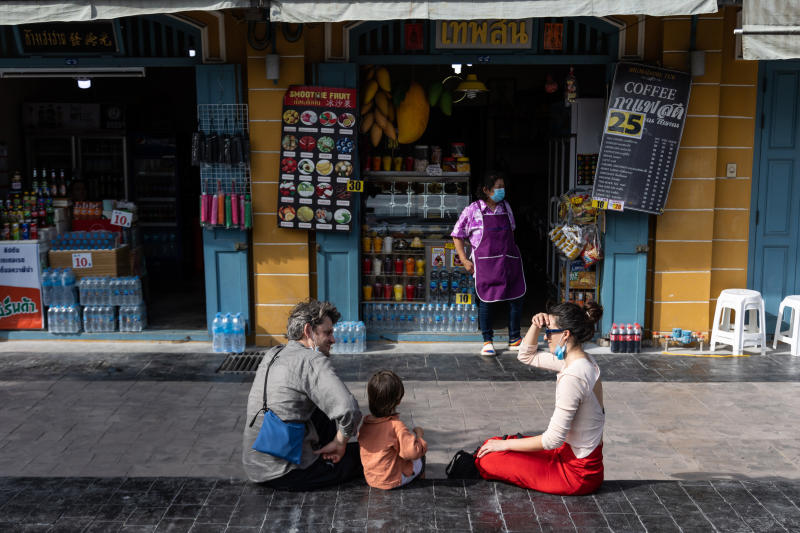 A foreign family sits outside a beverage store near the Royal Palace on Saturday.

Tourism operators have thrashed the government announcement increasing the Covid-19 alert to Level 4, insisting state policy should enable people to live with the virus instead of limiting travel activities.

Most business operators are ready to comply with the new rules, but will not agree if the government imposes strict lockdown measures again.

Chamnan Srisawat, president of the Tourism Council of Thailand, said the new Covid-19 alert will increase anxiety among people and inconsistency in business operations as demand fluctuates.

This is the most worrisome situation for the tourism sector, he said.

“As tourism largely depends on confidence and the government’s policies, any action from the authorities should be consistent and avoid frequent flip-flops to let the tourism industry recover in the long run,” he said.

Decisive action that allows economic activities to run as usual is needed after the country dealt with the pandemic for two years, said Mr Chamnan.

He said Thailand can learn from other countries that allowed people to live normal lives and simultaneously rebound from the crisis. Seven misbehaving monks were busted by the authorities last night in their makeshift drinking den.

Instead of heading back to the temple to share the Buddha’s wisdom, the seven monks are accused of seeking enlightenment at the bottom of beer and liquor bottles in four huts erected near their Pathum Thani temple, Wat Panyanantaram.

One of the monks, Soravuth, admitted that the huts had long been a place for the holy men to drink to their hearts’ content.

Another, Manoon, had gone viral in late January for doing his morning alms rounds in a car. He admitted that he would sometimes use a taxi to do the rounds.

All seven monks were taken before assistant abbot Mahasompong Kanttamamo in the evening, where he defrocked the four found intoxicated. The other three will keep their robes but will be reassigned to another temple. A Portuguese woman living on Phuket is asking the internet for help finding her prized Silkie chicken and offering a THB10,000 (US$310) reward for his safe return.

Marion Fernandez, 30, appealed via social media last night for any information about the fluffy cock she believe was birdnapped the previous evening.

“Missing my chicken,” she wrote in an all-caps Facebook post alongside photos of them both in happier times. “Somebody steal between 5-7pm in Patong Soi Khuanyang (Patong Hill Near Family Mart) Please bring back. 10,000 baht for bring back chicken. Please everyone share.” 3000 regular readers every day worldwide, including an English episode.
For 14 years we have been the best weblog of Udonthani with the latest news
always the first online.

A man who hanged nearly two days from the side of a cliff in Phatthalung province is resting in a hospital today.

It took more than 50 rescuers to complete the rescue last night of Amnuay Rattanachotiyo, who had been trapped on the precipice while climbing around the Khao Hua Chang Reservoir.

Initial reports indicated the 47-year-old Songkhla native left the nearby monastery where he was staying Tuesday and found a large cave to explore along the cliff. Noticing a light shining from the cave wall several meters up, he put down his belongings and used a rope to climb through the hole, which led outside.

Amnuay then tried to use his rope and tree roots to climb down from the outside, came up short about 30 meters from the ground.

He used his shirt to tie himself to tree roots to prevent himself from falling and spent Tuesday night in his makeshift sling until he got the attention of passers-by early Wednesday morning.

The rescue process took the entirety of Wednesday, with rescuers rappelling from the top of the cliffs down to his level to help him down to safety.

Residents told reporters that Amnuay was known to explore the area, and would often meditate overnight inside the cave.

Amnuay was suffering from exhaustion and under evaluation today at a nearby hospital. He was not tested for sobriety.